Competences of teachers of natural-physical sciences. An analysis from the perception of the students

Journal of Physics: Conference Series
Reino Unido
This article arises as a proposal in view of the need to evaluate the scientific competences promoted by teachers of the subject of physics at the level of basic secondary and secondary technical education. A valid questionnaire was designed from the application of scalar analysis, factorial analysis and content analysis, which is composed of 49 items evaluated by means of a Likert scale with five levels of response. It was applied in a sample of 249 students enrolled in a public educational institution during 2019, characterized by their good results in the area of physics in state tests. The results allowed the identification of strengths in the four dimensions proposed by the Ministerio de Educación Nacional, Colombia (pedagogical, didactic, disciplinary and behavioural), in contrast with some weaknesses within which the evaluation process stands out as the one with the greatest impact, since the students state that this process is assumed by the teacher as a mechanism of pressure and control. When investigating the teachers in a complementary way, positions were determined that were totally opposite to those held by the students, then it is suggested for future research to consider both the students and the teachers as informants and a supervision of the students' notes as the end of triangulating the results to refine the conclusions, on which future improvement plans will depend. 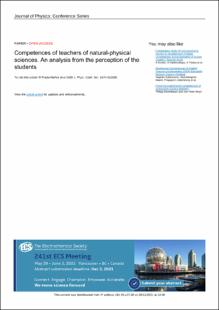