Reino Unido
We report the effective thermal properties at room temperature and proximate analysis of three mixtures of coke and carbon fines formed by uniaxial pressing at 30 MPa. Using differential scanning calorimetry and thermogravimetry, the thermal behavior of the carbon samples was determined. The KD2 Pro® system was used to measure the effective thermal properties, while the proximate analysis was carried out applying the ASTM D 3172-89 standard. It was found for coke fines that in the range between 40.00 °C and 293.94 °C there is a loss in weight of 3.2%, which corresponds to the degradation of low molecular weight volatiles, another degradation was also observed between 90.07 °C and 336.21 °C, and the maximum devolatilization temperature was 579 °C, finally from 700 °C the melting process begins, which corresponds to the formation of coke. It was also observed that the thermal conductivity increases with increasing coke concentration in the sample, and that the mixture with the highest thermal diffusivity was the one formed with 80% coke fines and 20% carbon fines. According to the thermal properties of the samples can be to be used efficiently as fuel. 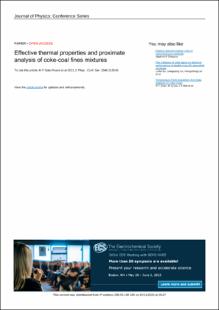