Through the powder metallurgy process, copper and iron powders were mixed in the proportions Cu between 15% to 75% and iron from 25% to 85% that made up the binary material systems. Material systems were topographically characterized with atomic force microscopy. Corrosion tests were established using potentiodynamic polarization curves. The worn surfaces' characterization was carried out by means of a Confocal Scanning Laser Microscope to complement the study. It was determined that the mixtures' stability and behaviour have different behaviours depending on the evaluated system because the wear system caused, indicating that the phenomenon can be additive. The corrosive phenomenon is dominantly affected by the microstructure of the material. From the results found, it is possible to infer that the best systems evaluated by corrosive contain the highest percentage of copper content. The topographic variation indicates the transition from the active zone to the passive zone of the metal due to electrochemical reactions in the presence of aggressive media. 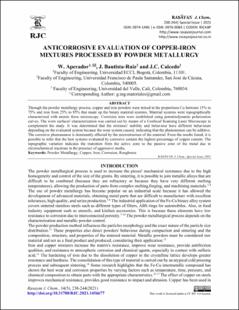