Determining the constitutive properties that describe the incipient hydraulic behavior of the materials, including the matrix domains and the distribution of macro and micropores, is crucial to analyzing the preferential water flow in saturated soils, ks, and unsaturated, ku. This study focused on determining the hydraulic conductivity in porous media under total and partial saturation conditions. The infiltration characteristics of three reconstituted soils were evaluated using five suction ranges employing conventional permeameters, an automated dual system, and mini-disk infiltrometers. The experimental cycles were carried out in granular soils with mixtures of diatomaceous soils, iron oxide (Fe2O3 ), and calcium carbonate (CaCO3 ) in 5–40% proportions. The differences between the granular microstructures of each material and the different hydraulic interaction mechanisms (suctione levels) significantly affected the values of ks and ku and the coupling between the pore domains and the defined water regime. Additionally, a lower impact was observed in the data set exposed to higher percentages of Fe2O3 and CaCO3 in different suction ranges, mainly due to a tension effect (meniscus) generated by suction in the granular skeleton. Since both parameters are mutually correlated and have a similar impact between methods and soil cores, ks and ku must be optimized simultaneously in each mechanism analyzed. The main findings of this work result in the confirmation that the unsaturated permeability decreases as suction is imposed on the sample. As well as the addition of different materials with Particle Size Distribution finer than the base sample, it also reveals a reduction in hydraulic conductivity, both saturated and unsaturated. 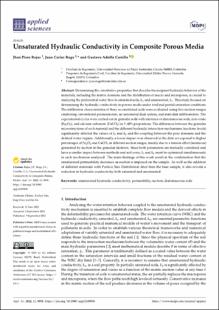 Except where otherwise noted, this item's license is described as © 2022 by the authors.