Journal of Physics: Conference Series
Reino Unido
This research included a sample of students aged between 8 and 16 years, residents of San José de Cúcuta city, Colombia, belonging to socio-economic strata 1 and 2. Multiple intelligences (musical, logical-mathematical, interpersonal, naturalistic, intrapersonal, kinesthetic, linguistic and spatial) were measured according to the proposal by Gardner and school performance as an average of each subject taken during the first two cuts of the school year. The authors applied a principal components analysis with the purpose of characterizing and analyzing these students according to multiple intelligences, academic performance and their relationships. The sample consisted of 60 girls and 61 boys whose average age was 12 years (95% CI: 11.7 – 12.4 years). In the logical-mathematical intelligence was where the students obtained the highest average score, while in musical intelligence the lowest. In the rest of the cognitive capacities they reached similar averages. In relation to the subjects that this group of students studied, the best average grades were in behaviour, religion and physical education and the lowest in English. Through the principal components analysis it was observed that there is no evident association between the types of intelligences and the grades in the school subjects. Girls, in general, achieved better average scores in all subjects compared to their male counterparts (p < 0.05). Except for naturalistic intelligence, males show a greater development in the rest of the intelligences, in contrast to the girls who have higher scores in naturalistic intelligence. 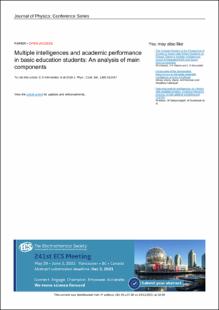