Scientometric analysis of research on eSports from 2007 to 2017

A scientometric analysis about eSports publications from 2007 to 2017 was carried out. HistCite was used to analyze the data collected from Web of Science during the period mentioned. The results suggest that eSports research has increased during the 11 years of study; the country with the highest number of publications was the United States of America, with eight institutions predominant in the number of publications. Most of the articles and the highest local score of total citations come from countries where eSports are considered sport; the top three journals with the most publications were International Journal of Gaming and Computer-Mediated Simulations, Games and Culture and Psychology of Sport and Exercise, where the top three journals with the highest TLCS are Games and Culture, New Media & Society and Computers in Human Behavior. 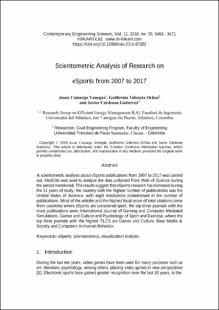