Journal of Physics: Conference Series
In the field of civil engineering, live loads are related to the use of the floors of buildings and dwellings. Live loads are produced by weight of people and furniture. Such loads generate internal physical effects such bending moments, shear forces or axial forces on structural elements that can show high uncertainty in magnitude and position. This work proposes the application of a physical-mathematical model which considers such uncertainty when forecasting maximum probable live loads to be used in structural analysis and design of elements. To do so, field data of live loads acting on different floors of 20 dwellings built in San Jose de Cucuta, Colombia, were collected and used to verify the model validity. As a result, it was observed a small difference in forecasted live loads with respect to the live loads prescribed by the national and international structural design standards. Live loads forecasted using the model describe modern trends of use of floors and can be used as safe values for designing structural elements. Physical quantities related to bending moment effects resulted to influence importantly the obtained maximum loads values. 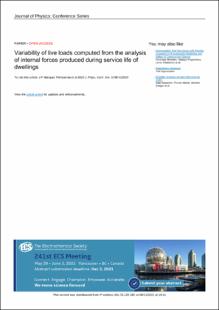 Except where otherwise noted, this item's license is described as Content from this work may be used under the terms of the Creative Commons Attribution 3.0 licence. Any further distribution of this work must maintain attribution to the author(s) and the title of the work, journal citation and DOI. Published under licence by IOP Publishing Ltd