Estimation of missing data in a geophysical series of precipitation

Journal of Physics: Conference Series
The analysis of dynamic systems is a topic of great interest in the basic sciences since it allows direct inference of the behavior of different systems. The study of physical phenomena provides large databases that, if recorded at regular time intervals, constitute time series. However, time series of geophysical data in many cases present missing data and their estimation requires the application of valid methods that allow estimating reliable information to complete the series since some analysis methods require these series to be complete. Two methods are used in this article to estimate the missing values of the precipitation series in the city of San José de Cúcuta, Colombia, the first one consists of considering the univariate data series and applying an adjustment of the sequential conditional expectation method of forecasting with restrictions, the second one refers to analyze the data series of a nearby station and through multivariate methods establish the cointegration between the series, and then use this as a basis for estimating the missing data in the analysis series. The two methods are recursive, a first estimation of the model is made ignoring the missing data, an initial estimation of the missing data is made, then a new estimation of the model parameters and a new estimation of the missing data is made, the algorithm continues running with the new values replacing the values estimated in the previous phase until the difference of the estimated values between successive iterations is less than a value fixed beforehand. Finally, a comparison is made between the estimates made by the two methods. 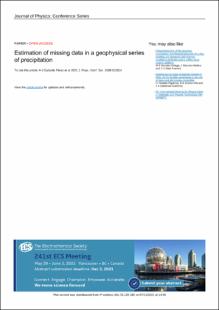