Reino Unido
A study has been carried out on the main physicochemical characteristics of the refractory bricks that are currently used in traditional coke-making kilns in Colombia. Two classes of material (brick) used in this industry were collected, which come from a geographical area of the country that supplies brick to many kiln builders. These materials were characterized by X-ray diffraction and fluorescence, scanning electron microscopy, dilatometry, thermal conductivity, pyroscopic resistance, and percentage of water absorption. The results obtained show that these materials have had very low firing temperatures in the factory, which is evidenced in the dilatometry, microscopy and water absorption percentage data. This characteristic brings with it high firing shrinkages when subjected to high temperatures (> 4% at 1,200 °C). There is a high presence of quartz in the material (40% or more), an aspect that increases the risk of fissure formation. Chemically there is a limited aluminum content (between 22% and 23%) compared to other reference refractories. The onset of fusion of these materials occurs around 1,360 °C. The thermal conductivity obtained can be considered moderate (between 0.634 W⁄mK and 0.760 W⁄mK), thus demonstrating limited applicability as an insulator. 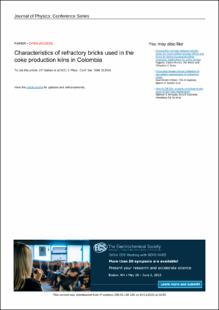