Journal of Physics: Conference Series
Reino Unido
The interdisciplinary nature of knowledge is one of the objectives promoted in Colombia, fostering in students the ability to recognize that the curriculum does not work in isolation; if knowledge is complementary, its joint development leads to better academic performance. This research is oriented towards showing an application of the mathematical concept of the slope of the straight line in physics applications, favoring the understanding of the relationships between variables, as occurs with the graphs of kinematics. A group of eleventh grade students from a private educational institution filled in a questionnaire for data collection, based on three situations proposed to answer three open questions in which a reasonably justified answer was required. A part of the group correctly interpreted the graphs by describing the characteristics of the movement in each time interval, but only a few were able to associate the slope of the line as the velocity or acceleration as a function of the variables mentioned in the graph, although their argumentation was based on the angle of elevation of the line. 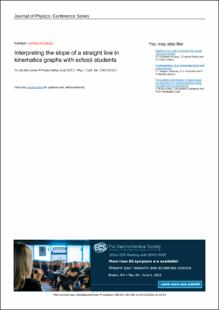