Through the powder metallurgy process, copper and iron powders were mixed in the proportions Cu between 15% to 75% and iron from 25% to 85% that made up the binary material systems. The X-ray diffraction technique was used to determine the crystalline structure. Material systems were topographically characterized with optical microscopy. Tribology tests were established using a pin on the disk tribometer. It was determined that the stability of the mixture has different behaviors depending on the evaluated system because the wear system caused, indicating that the phenomenon can be additive. The mixed material is characterized by high friction coefficient and high wear due to the samples' specific properties by increasing the amount of iron in the mixture. The systems analyzed indicate that mechanical degradation was mainly reduced. Dimensional variation of the study specimens was evidenced due to the influence of copper in the system. Only the austenitic structure of the steel was observed, which indicates a complete diffusion of the copper. 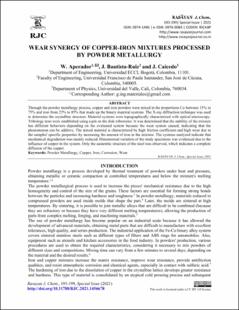