This article presents a comparison of energy generation using two methods of power production for different geographical locations. For this comparison, the HOMER software was used, which allows simulating generation systems with different energy sources. For the development of these simulations it was necessary to collect three parameters in the locations to be analyzed, which were wind speed, solar radiation and temperature. The photovoltaic array system was simulated using from 10 to 200 units with a constant value of one wind turbine, while for the wind turbine system, 1 to 9 units were used together with a constant value of 100 photovoltaic arrays. For the photovoltaic system, there is no major difference in the net project cost, the renewable fraction and the annual carbon dioxide production when using a greater number of arrays, but an increase in energy production is observed, a greater effect is obtained by changing the location of the system, analyzing the wind system a greater number of turbines increases the energy production, but also increase the annual carbon dioxide production and project cost, there is no significant difference between locations for the project cost the other parameters are affected. By using an optimization algorithm in the systems, the best performance was obtained in Puerto Bolivar using 105 photovoltaic arrays of 1kW and 3 wind turbines of 1.5MW. 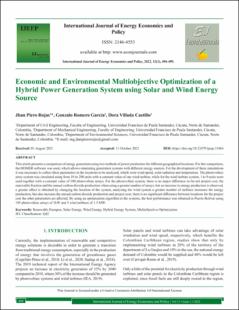