Impact of Antibiotics as Waste, Physical, Chemical, and Enzymatical Degradation: Use of Laccases

The first traces of Tetracycline (TE) were detected in human skeletons from Sudan and Egypt, finding that it may be related to the diet of the time, the use of some dyes, and the use of soils loaded with microorganisms, such as Streptomyces spp., among other microorganisms capable of producing antibiotics. However, most people only recognise authors dating between 1904 and 1940, such as Ehrlich, Domagk, and Fleming. Antibiotics are the therapeutic option for countless infections treatment; unfortunately, they are the second most common group of drugs in wastewaters worldwide due to failures in industrial waste treatments (pharmaceutics, hospitals, senior residences) and their irrational use in humans and animals. The main antibiotics problem lies in delivered and non-prescribed human use, use in livestock as growth promoters, and crop cultivation as biocides (regulated activities that have not complied in some places). This practice has led to the toxicity of the environment as antibiotics generate eutrophication, water pollution, nutrient imbalance, and press antibiotic resistance. In addition, the removal of antibiotics is not a required process in global wastewater treatment standards. This review aims to raise awareness of the negative impact of antibiotics as residues and physical, chemical, and biological treatments for their degradation. We discuss the high cost of physical and chemical treatments, the risk of using chemicals that worsen the situation, and the fact that each antibiotic class can be transformed differently with each of these treatments and generate new compounds that could be more toxic than the original ones; also, we discuss the use of enzymes for antibiotic degradation, with emphasis on laccases. 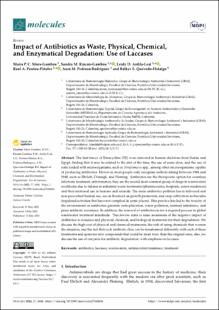