: Using the rf magnetron sputtering technique, Bi3.75La0.25Ti3O12 and Bi3La1Ti3O12 coatings were formed and obtained as a thin film on Hastelloy substrates. When subjected to high-temperature conditions, the effect of lanthanum on the anti-corrosive properties of the coatings was investigated. The anti-corrosive response was evaluated by electrochemical impedance spectroscopy and potentiodynamic curves, which are rarely reported. Hot corrosion occurs through the electrochemical mechanism, and more information can be obtained through electrochemical corrosion tests, which are very effective and fast. The electrochemical behavior at high temperatures was studied via molten salt corrosion tests, potentiodynamic polarization curves, and electrochemical impedance spectroscopy. Additionally, the coatings were evaluated via scanning electron microscopy and transmission microscopy to determine their morphology. With X-ray diffraction, the crystallinity of the films was determined. It was determined that the corrosion rate directly correlates with the temperature, attributed to the mechanisms induced by the Na2SO4 and V2O5 salts that generated condensation. As the temperature increases, the density of the corrosion current increases in the thin films of Bi3.75La0.25Ti3O12 and Bi3La1Ti3O12. When comparing the two compounds, it is determined that the increase in lanthanum alters the positive acid character, thus reducing the dissolution of the oxides and increasing protection. 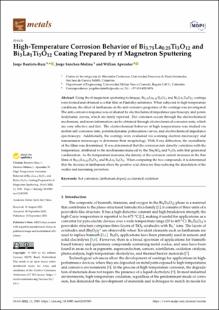 Except where otherwise noted, this item's license is described as Copyright: © 2022 by the authors.