The transfer of heat in an underground environment is due to circumstances, natural and introduced elements. In an underground mine, the heat is generated by the geothermal gradient, the self-compression of the rocks, the use of explosives, diesel equipment and human metabolism, etc. Since any or all of them can be heat generators, it is important to control the temperature and humidity in the mines, both to understand the nature of the heat sources and to calculate or estimate the magnitude of the flow of this. (Hartman et al, 1997) [4]. The increase of the temperature in underground environments generates risks, which can cause tragedies in the worst cases. Two main aspects must be taken into account due to the risk generated by high temperatures: one is the affectation to the corporal health of the workers and the other is the impact on the safety and productivity of the mine. (Su et al, 2009) [9]. When humidity and temperatures are high in an underground environment, workers suffer from a feeling of not comfort, generating stress in them, and this in turn leads to an increase in accidents and a decrease in productivity. As the depth increases and the level of mechanization increases, the high temperatures and the damages produced by the heating, are the biggest problems that the mining safety presents, limiting the activity in the coal mines. (Song and Xie, 2011) [8] (Xie, Z., 2012) [11] As a referent, in Table I, the percentage of accidents due to an increase in air temperature is related to gold mines in South Africa. (C. Anguo.2004) [1]. 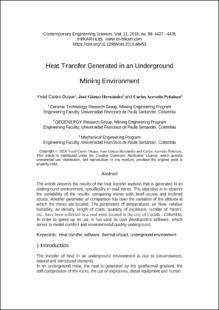