Post-transcriptional gene silencing (PTGS) is an evolutionarily conserved plant defense mechanism against viruses. This paper aimed to evaluate a dsDNA construct (77 bp) as a template for in vitro production of virus-derived artificial small hairpin RNAs (shRNAs) and test for their potential to trigger the RNAi mechanism in Nicotiana benthamiana plants against CMV after their foliar infiltration. This approach allowed for the production of significant amounts of shRNAs (60-mers) quickly and easily. The gene silencing was confirmed using polymerase chain reaction (PCR), immunological-based assays, and real-time PCR (qPCR). The highest levels of gene silencing were recorded for mRNAs coding for replication protein (ORF1a), the viral suppressor of RNA silencing (ORF2b), and the capsid protein (ORF3b), with 98, 94, and 70% of total transcript silencing, respectively. This protocol provides an alternative to producing significant shRNAs that can effectively trigger the RNAi mechanism against CMV 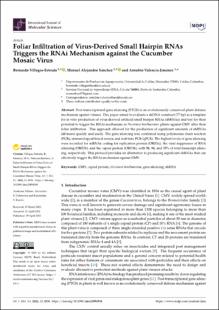