This article analyses the roughness of ASTM-A36 steel both in its delivery state and after various cutting processes. The material was cut with different methods conventionally used in the metal-mechanic and construction industry, in addition to other non-conventional processes used to a lesser extent in the industry. Similarly, similar cuts were made to maintain test homogeneity and to analyze the faces of the cut on each specimen in a similar manner. Among the conventional cuts made to the specimens are the milling machine, oxy-cutting and cutting machine, while the non-conventional ones were applied by EDM and plasma, maintaining as far as possible similar cutting and working parameters. Subsequently, the roughness of the cut surface of each of the specimens was studied using a BAKER K130/8 analog tape roughness meter, which allowed quantifying the changes that occur in the material depending on the cutting method used and defined according to each method that can affect the surface finish and therefore the final application of the material. The graphical results allowed a comparative analysis of all the methods used, as well as the differences found between them and to obtain important conclusions that can be used in the new techniques of the manufacturing processes. 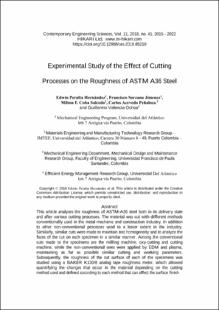