This study investigates distillery wastewater, commonly known as vinasse, as a potential culture medium for the production of Chlorella vulgaris and its most relevant metabolites. The effect of vinasse concentration on the composition of the biomass (proteins, carbohydrates, and lipids) was evaluated in treatments performed in 6-L tubular air-lift reactors. The reactors were operated at 25 ◦C for 18 days, in total darkness, under a continuous flow of air. Results showed a rapid growth of microalgae in the first ten days, when an average production of 0.87 g/L was reached. Then, the daily biomass productivity began to decrease, up to an average value of 11.8 g/L at the 16th day. For all treatments, there was a significant reduction in the concentration of most metabolites in the first eight days. This was likely due to the adaptation of the biomass to the new conditions, with a transition from autotrophic to heterotrophic metabolism. From the 10th day, the concentration of metabolites in the biomass began to increase, reaching a nearly constant value at the 16th day. The observed maximum concentrations (%w/w) were: 48.95% proteins, 2.88% xylose, 7.82% glucose, 4.54% arabinose, 8.28% fructose, and 4.82% lipids. These values were only marginally affected by the type of treatment. Overall, the results obtained suggest that vinasse is a promising and sustainable medium for the growth of C. vulgaris and the production of valuable metabolites. 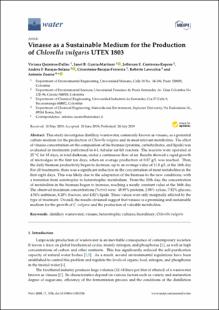