Journal of Physics: Conference Series
Inglaterra
In the perspective of math and physical-computational, software testing is conceived as a modeling of scenarios based on the different levels of abstraction that software is developed. These specifications allow marshaled representation of each software component as well as its intra - extra process interactions. This work analyzes in a systems approach under the perspective of computational physics how to identify, interpret, represent, and formally model functional software tests and how, through critical path representations, white box testing is developed. A test scenario is established for components built in the software called "Ferticacao," where white box testing is applied. Results show that the use of modeling techniques based on critical paths show the interaction of the code and its interoperability at the level of data structures and component calls that allow to quickly analyze the functionality of the software at the source code developing level. 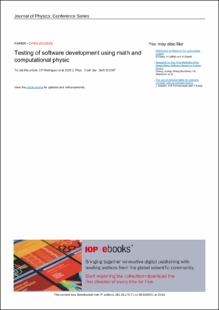