Journal of Physics: Conference Series
This research aimed to analyze the evolution of the algebraic error in the evaluation processes of mathematics and physics in engineering students, of the Universidad de Pamplona, Villa del Rosario, Colombia. Theoretically, it was based on a typology of errors. The methodology was descriptive quantitative study. The sample consisted of 77 students from engineering programs. The instruments were a Likert scale and a test of knowledge in mathematics and physics involving algebraic arithmetic operations. The results show that 9 errors were replicated in the students of the three subjects evaluated. The most frequent errors were errors when performing algebraic arithmetic operations followed by incorrect own procedures and invalid inferences and errors in the additive resolution of the potency of an unfinished binomial and procedure. In conclusion, it can be said that the same errors appear in the three subjects although it is believed that with the passing of the semesters and the training of the students they should disappear when they finish their academic program. 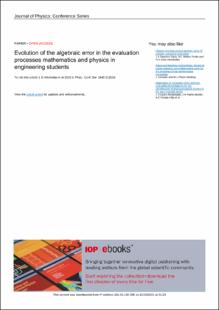 Except where otherwise noted, this item's license is described as Esta obra está bajo una Licencia Content from this work may be used under the terms of the Creative Commons Attribution 3.0 licence.