Oxygenated compounds were obtained from methane and carbon dioxide using the unconventional activation by dielectric barrier discharge plasma. The process was performed using a multiphase feed composed of methane, liquid water and carbon dioxide as oxidizing agent. The effect of the CH4/CO2 ratio as well as the flow of liquid water were investigated. The results show that the presence of liquid water in the reactor favors the formation of oxygenated compounds. A direct proportional relation between the flow of water, concentration of methane in the gaseous feed (in the presence of water) and the amount of the produced oxygenates was observed. The highest value of selectivity towards oxygenated compounds was 21.2%, with methanol and formic acid being the main products formed. 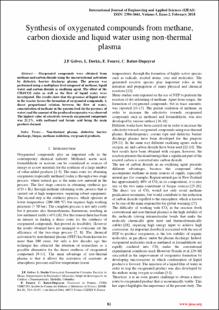