Burnishing is a machining process without chip removal that seeks to improve the surface roughness of a component by means of plastic deformation of the surface layers. Due to the process mechanics, during its execution, a compressive residual stress is introduced into the surface of the workpiece during its execution, which improves various physical-mechanical properties of the component. This process has been used industrially since the 1950s, mainly in pieces made of soft materials (hardnesses up to 45 HRC), in operations subsequent to processes such as turning. The development of tools with harder materials, has opened up the possibility of burnishing on harder materials (hardnesses up to 62 HRC). Burnishing of hard materials has opened up an alternative to traditional finishing processes such as grinding, its main comparative advantage is its low-cost operation, which reduces grinding costs by 8 to 15 times. The plastic deformation burnishing is a metal working process with material removal whose advantages are that it does not generate waste, which is a competitive advantage over other surface finishing processes such as grinding, where waste is generated which also needs to be collected and subsequently treated. The use of e.g. coolants is not necessary either, in recent years, attempts have been made to eliminate them from material working processes, because their presence not only causes a significant cost that impacts the manufacturing process, also represents an environmental problem due to its polluting effect, with the associated management costs involved. This article presents the results of an AISI 1045 test specimen experiment, to which a turning process has previously been carried out. 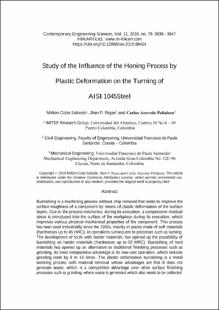