We investigate the deposition of TiWSiNx thin films by means of the method of reactive magnetron co-sputtering, setting the nitrogen flow ratios N2/(Ar + N2) at 4.8%, 9.1%,16.7 and 33.3%. The crystallographic structure of the films was established through X-ray diffraction (XRD), the morphology and topography were evaluated through scanning electron microscopy (SEM) and atomic force microscopy (AFM), the chemical composition was evaluated through X-ray diffraction and X-ray photoelectron spectroscopy, the mechanical properties were evaluated by nanoindentation, and the wear resistance was studied via nanowear and pin-on-disk. It was found that films deposited between 4.8% and 16.7% nitrogen flow ratio exhibited an amorphous phase. As the nitrogen was increased, the films evolved into a mixture of amorphous Si3N4 and crystalline TiWN phase. Moreover, the film morphology changed to fine columnar as the nitrogen flow ratio increased. As a general observation, the hardness, resistance to plastic deformation (H3/E2), and residual stress of the samples increased as the nitrogen flow ratio increased. The maximum hardness, resistance to plastic deformation, and residual stress were 22 ± 0.4 GPa, 213 ± 20 MPa, and 1.4 ± 0.01, respectively. The lowest nanowear volume (0.47 µm3) and wear rate (11 ± 8 10−9 mm3/N mm) were obtained for films deposited at high nitrogen flow ratios. The lowest friction coefficient (0.15) was recorded for films deposited at 16.7% nitrogen flow ratio. 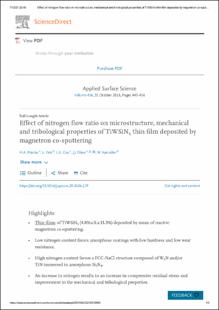