A simultaneous evaluation was done of the wear-corrosion of the coatings of beta-tricalcium phosphate on titanium (Ti) substrate deposits obtained by the magnetron sputtering technique. The characterization was developed by a tribometer system coupled to an electrochemical cell. This system allows the combination of corrosion and friction tests between the surface of the coating and the spherical bone pin. The synergy of the two wear phenomena was characterized, which were monitored by means of the electrochemical response as a function of the value of the friction coefficient. It was determined that the system generates a gradual film accumulation process, followed by an instantaneous loss after a critical period. Additionally, it is concluded that the increase in the coefficient of friction is not immediately followed by the increase in wear rate 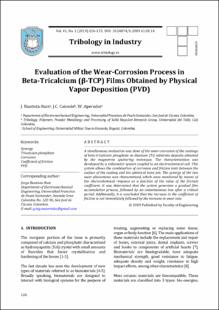