Microalgae has recently been highlighted as source of valuable products including biofuel. The production process of biofuels from microalgae involves mass cultivation, harvesting, deep dewatering, lipid extraction and biofuel conversion. In this work, lipids from microalgae Navicula sp. were obtained using multifunctional process that consists of acid hydrolysis or cellular disruption, oil extraction and in situ transesterification. The effect of alcohol added to produce ethyl and methyl esters on lipid extraction efficiency was evaluated using methanol and ethanol in order to determine the most suitable route for obtaining the high values of lipids and total reducing sugar. The highest lipid extraction efficiency and total reducing sugar (7.72 % and 2.63 mg/ml, respectively) was obtained for methanol. The low lipid extraction efficiency of multifuctional process is due to transesterification of lipids that gradually released into the system. The formation of alkyl esters was confirmed by FTIR with an increase in carbonyl peak as the reaction progressed, thus muntifuctional process reduce cost of alkyl esters production by eliminating the step of lipid extraction by solvent. 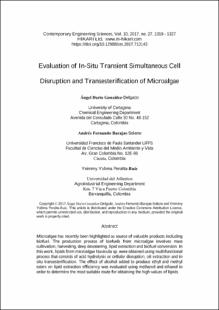