Contemporary Engineering Sciences
Bulgaria
Chatter in the machine tools represents one of the biggest problems due to the instability in the machining process, breakage of the tool and accelerated wear of the tool and spindle or machine components in the metal cutting processes, such as turning, milling, boring, drilling, etc. Which translates into a poor-quality surface finish, this phenomenon consists of self-excited vibrations that are produced and maintained due to shear forces, the purpose of this article is to predict the optimal points of operation in the milling process for Ni-based Inconel and make a comparison with Ni-based Udimet 500 through observation supported by a graphical and analytical tool to generate stability lobe diagrams, a code was developed in the MATLAB® software capable of generating stability lobe diagrams for the milling operation that provides optimal operating points to avoid tool vibration, thus improving chip removal rates and increasing productivity. 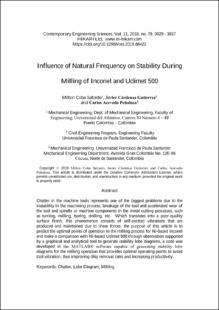