A non-structural concrete mix was elaborated with a resistance of 14.5 Megapascals under the parameters indicated in the American Concrete Institute (ACI), ASTM and the Colombian Technical Standards (NTC). Six mixing cylinders were made with the concrete mix to test their mechanical resistance using the compressive resistance test, 3 were tested on day 7 and the 3 left were tested on day 28, the tests were performed in the IBERFEST machine, located in the laboratory of resistance of materials of the University Francisco de Paula Santander in the city of Cucuta, Colombia. The results were averaged to obtain the data of interest. Hospital solid waste was treated and processed in the Ecosteryl machine 250C, located in the environmental technology park Guayabal, Cucuta. The processes for the treatment of the waste material were performed under the established procedures in the Colombian decree 2676 of 2000. Taking particles, no bigger than 20mm of waste material, 2.5, 5 and 7.5% of the total stony aggregate used for the elaboration of the non-structural concrete was replaced, each of the 3 percentages were used for the elaboration of the 6-cylinder mixes (2 of each). The cylinders were tested on days 7 and 28 using the same procedure implemented to the mix of non-structural concrete. With the data obtained from the tests a comparative analysis was performed, identifying the presented characteristics of each. 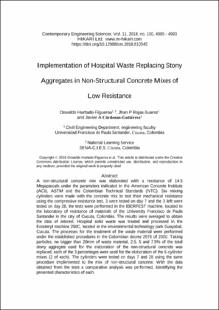