Journal of Physics: Conference Series
Reino Unido
Three mixtures were made for conventional concrete with different additions of cement, 300 kg/m3, 350 kg/m3 and 400 kg/m3, being these the 3 designs of mixtures more used for the elaboration of simple concretes. For each of the conventional mixtures, the % of water used for mixing was varied, which constituted 60%, 65% and 70% of the weight of the cementitious material. These % were taken in gradual increase to the one traditionally used in each of the mixing designs made. The aggregates used were assigned by Transmateriales S.A, located in the city of San José de Cúcuta, Colombia. The analysis of the materials of the mixtures, were carried out under the standards of the "Normas Tecnicas Colombianas" and the Tests of the "Instituto Nacional de Vías". 40% of the concrete mix cementitious material was replaced by fly ash and hydrated lime. In order to determine the mechanical behavior of the mixtures resulting from partial addiction. The ash was collected from the thermoelectric Termotasajero S.A, located in the city of San José de Cúcuta, Colombia. The hydrated lime was recovered from the municipality of Malaga located in the department of Santander, Colombia. Of the % of cementitious material replaced, 30% corresponded to lime and 70% to ash, as an experimental basis for the production of unconventional mixtures. Having the % of cementitious material to replace and the % of substitute material, 3 designs of experimental mixtures were made taking as base each one of the designs of conventional mixtures made, with equal % of water for its mixing. Twenty-seven cylinders were manufactured for the experimental mixtures and the same number for conventional mixtures, a figure that corresponded to the production of 3 specimens per % of water added in each of the established mixture designs. The compressive strength of the cylinders made in the materials resistance laboratory of the Universidad Francisco de Paula Santander, San José de Cúcuta, Colombia was tested. It was concluded in the influence of the % of water in the mechanical resistance of the experimental mixtures and the viability of the use of this type of mixtures in the elaboration of nonstructural concretes, data of importance with which the construction costs would be reduced considerably, generating in turn, a positive environmental impact by means of the inclusion of residual materials in the concrete mixtures. 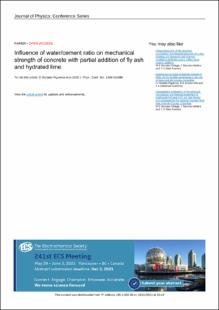