In this article, an organic Rankine cycle (ORC) was integrated into a 2-MW natural gas engine to evaluate the possibility of generating electricity by recovering the engine’s exhaust heat. The operational and design variables with the greatest influence on the energy, economic, and environmental performance of the system were analyzed. Likewise, the components with greater exergy destruction were identified through the variety of different operating parameters. From the parametric results, it was found that the evaporation pressure has the greatest influence on the destruction of exergy. The highest fraction of exergy was obtained for the Shell and tube heat exchanger (ITC1) with 38% of the total exergy destruction of the system. It was also determined that the high value of the heat transfer area increases its acquisition costs and the levelized cost of energy (LCOE) of the thermal system. Therefore, these systems must have a turbine technology with an efficiency not exceeding 90% because, from this value, the LCOE of the system surpasses the LCOE of a gas turbine. Lastly, a life cycle analysis (LCA) was developed on the system operating under the selected organic working fluids. It was found that the component with the greatest environmental impact was the turbine, which reached a maximum value of 3013.65 Pts when the material was aluminum. Acetone was used as the organic working fluid. 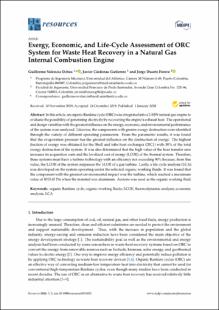