Journal of Physics: Conference Series
Londres, Inglaterra
An experimental investigation was made in search of the improvement of the material used for the conformation of the subgrade in pavements. Three separate excavations were carried out 150 m apart in a 510 m stretch located in the Guayabal environmental technology park in the city of San José de Cúcuta, Colombia. In each excavation 2 samples were taken at depths of 0.50 m and 1 m. The soil samples extracted were analyzed in accordance with the regulations of the "Instituto Nacional de Vías" of Colombia in its update of 2013. It was collected material, not superior to 20 mm, of biosanitary residues treated by the Ecosterile machine series 250C located in the environmental technological park Guayabal. Five experimental mixtures were carried out partially substituting 2%, 6%, 8%, 10% and 14% of the weight of the excavated soil with treated biosanitary residues, random percentages taken as initial reference in the experimentation due to the characteristics of the substitute material. The California bearing ratio test was performed on experimental mixtures whose data were tabulated and compared with those obtained in similar tests carried out on the material conventionally used for the improvement of the subgrade in pavements according to Colombian regulations. The tests provided interesting information that concluded in the substitution of 2% of the conventional material to improve the performance of the subgrade in the intervened section, a value that obtained better results in the California bearing ratio test, yielding 79.2% with respect to the result obtained by the conventional material. The exposed results are convenient for the economy of road projects due to the partial substitution of traditional material by residual material, at the same time the use of a hospital waste is implemented as construction material, bringing with it positive environmental and social benefits as far as its final disposition. 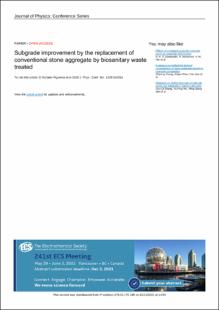