Journal of Physics: Conference Series
Reino Unido
In every branch of science, the classification of the object of study shows the degree of understanding reached. Hydrology seeks this sorting system that classifies watersheds globally, a highly complex issue given the degree of heterogeneity of climates, geomorphology, vegetation cover, soils and geology. This project provides ideas on the possibilities of classification of basins in the southern region of the Andean zone in Colombia, from hydrological similarity point of view, evaluated by means of "signatures" that synthesize the hydrological functioning of the basin. Five signatures were considered: Runoff coefficient, base flow index, slope of the flow duration curve, discharge-precipitation elasticity, and hydrograph rising limb density. Geomorphological characteristics and values of hydrological signatures were determined for 25 catchments. Two classification methodologies were implemented: k-means clustering and classification and regression trees. The grouping identified two groups for base flow index, rising limb density and slope of the flow duration curve firms, and three groups for the remaining runoff coefficient and streamflow-precipitation elasticity. No significant correlations were found between hydrological signatures and climatic and geomorphological characteristics, suggesting a degree of complexity within hydrological processes that require the inclusion of other components such as vegetation and soils characteristics. By applying regression trees, the basins were grouped into 4 classes, with the slope of the flow duration curve being the main discriminator and the rising limb density in the second level. The importance of the flow duration curve as an indicator of hydrological processes and the rising limb density as an indicator of the climatic component, the driving force of said processes, is highlighted. 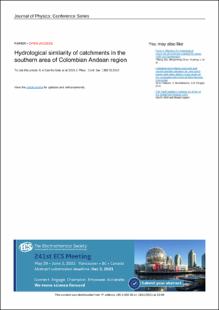