Renewable sources used to produce energy has gained momentum due to its environmental benefits and economic feasibility. Colombia has been part of the global tendency to develop non-conventional renewable technologies such as wind and solar and integrate those technologies into the energy matrix of the country. However, the lack of understanding of the wind and solar resources in some areas of the country including the department of Norte de Santander, Colombia, has limited the deployment of these technologies and the development of new projects. This research proposes an approach to assess wind and solar resources in the department of Norte de Santander, Colombia. Also, this paper discusses the physics behind the generation of energy from wind and solar sources and the contributions required from different backgrounds to help in the wide deployment of solar and wind energy. In this first stage, a rough technical concept is developed, and the proposed sites are selected based on publicly available maps of low resolution presenting average irradiance and wind speed, and proximity to electricity transmission infrastructure. The areas selected have a global horizontal irradiance ranging from 4.0 kWh/m2 to 5.0 kWh/m2 and wind speeds between 4.0 m/s and 6.0 m/s at 10.0 m height on average in a year. 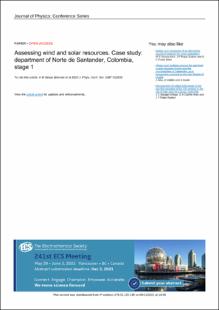