Analysis of caffeine in energy drinks by ultra-fast liquid chromatography

Journal of Physics: Conference Series
Reino Unido
The objective of this work was to standardize the method of analysis of caffeine and determine its content in three energy drinks (Vive 100, Peak and Red Bull) consumed in the Colombian market, which were selected based on the results of a significant survey conducted to 384 people in the metropolitan area of "San José de Cúcuta, Colombia", from each energy drink two production lots were taken and in turn from each lot three drinks were taken for a total of 18, each one was analyzed in triplicate; caffeine concentration was determined on a Shimadzu Prominence ultra-fast liquid chromatograph. The average concentrations in mg of caffeine/L, for lot 1 were 256.96, 218.10 and 235.73 for drinks Vive 100, Peak and Red Bull, respectively and for lot 2, the respective values were 229.30, 233.86 and 238.33. As established in Resolution 4150 of 2009, the maximum limit allowed is 320 mg of caffeine/L, it was observed that the concentrations in all the energy drinks analyzed are lower, therefore, they are complying with the provisions of the law. 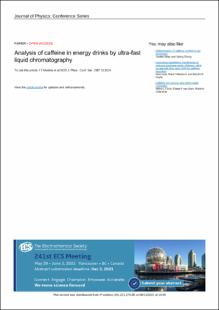