Nowadays, microalgae has been considered as source of valuable products such as astaxanthin, which is a carotenoid with great commercial potential as antioxidant widely used in many industries such as pharmaceutical, cosmetics and health supplement. Objectives: This work was focused on technical-economic pre-feasibility study of hybrid system for cultivation, harvesting and extraction of astaxanthin from H. pluvialis microalgae in five Colombian cities (Barranquilla, Cartagena, Santa Marta, Barrancabermeja and Cúcuta). Methods/Analysis: A hybrid system was purposed based on flat panel + open pond Photo Bioreactor (PBR), in which cell growth is inhibited by increasing radiation. Additional stages as centrifugation, filtration, and drying, milling and supercritical extraction were also implemented. An economic prefeasibility study was applied in order to determine the suitability of locations in terms of NPV, IRR and PP. Findings: It was found that the most feasible location for astaxanthin production is Santa Marta with NPV, IRR and PP of € 5,529,203, 50% and 1.9 years, respectively. Novelty/Improvement: These results suggested that astaxanthin can satisfy national demand of antioxidants by producing it from H. pluvialis microalgae. 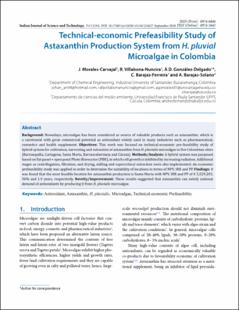