Reino Unido
Viscoplasticity and pyroplasticity of clays are important characteristics to control in production processes of lightweight concrete aggregates. When clay is calcined under temperatures above 1,000 ℃, its volume increases. For this reason, it is important to investigate how much volume can gain a given clay before using it in production of lightweight aggregates. This research work has evaluated the expansive capacity of some Colombian clays, applying to them static heat treatment in furnaces at temperatures above 1,000℃. The theoretical background of this work is based on the state of the art of production processes of lightweight clay-based aggregates, which were used to determine if the available clay is a precursor of lightweight aggregate. Also, chemical characteristics were determined using X-ray fluorescence tests. Raw material was chosen from several clays existing in San José de Cúcuta, Colombia. The clays were processed until particles’ diameters resulted smaller than 75 µm. Using these particles, pellets with diameter varying from 10 mm to 15 mm were formed. To determine the expansion capacity and the reduction of volumetric density, volume and weight of pellets were measured before and after applying the heat treatments. When the clay presented a low expansion capacity, technological nutrients were added to the mixtures attempting to maximize the expansion capacity of the pellets. A swelling of up to 3.24 times the initial size of pellets was observed. technological nutrients based on organic matter were chosen and applied in a proportion of 1: 4, i.e., one gram of technological nutrients was added to 4 g of clay. The density of manufactured aggregates resulted to be between 0.50 g cm! ⁄ and 1.93 g cm! ⁄ . Clay mixtures added with technological nutrient showed density lower than 1 gram per cubic centimeter, this means that they could float on water 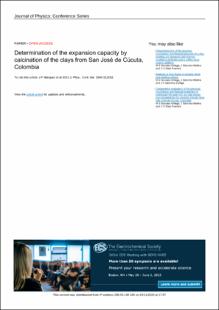