Reino Unido
Bridges are structures designed and built to overcome natural and artificial obstacles. The analysis and design of bridges is carried out following principles of physics applied to engineering. The aim is to estimate the structural efficiency of short bridges according to their physical and economic characteristics through equations that measure the cost tendency, identifying which ones have the highest structural efficiency for a given length between supports. The design of short bridges was carried out by means of a mathematical modeling in a software based on finite elements. A comparative cost analysis was carried out for various types of short vehicular bridges designed with reinforced concrete decks supported by reinforced concrete beams; post-tensioned concrete beams; and structural steel beams. It was determined that the bridge with a reinforced concrete deck is the alternative with the best structural efficiency according to its physical and economic characteristics with spans of 12 meters and 18 meters. According to the estimated cost equations, it is concluded that, from 18.49 meters post-tensioned concrete bridges are the most efficient physically and economically. Structural steel bridges are the least structurally efficient for short bridges. Therefore, the construction of short vehicular bridges with structural steel is not feasible. 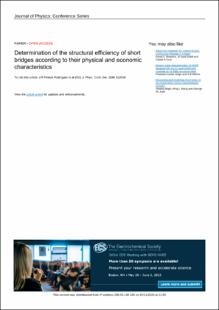