Journal of Physics: Conference Series
Reino Unido
The 316 L steel is a type of stainless steel widely used in the medical industry, which in recent years has been studied for different uses in society. Being an engineering material, it is imperative to know its performance based on its physical and mechanical properties that allow identifying the response of this steel in addition to thin films as coatings. Bismuth and titanium have been recently used to improve the properties of 316 L steel, so they were used in this study. The sol-gel technique was used as the film forming method. The response of physical and mechanical properties was evaluated from the analysis of microhardness and coefficient of friction reported for the different types of steel-coating systems. Higher microhardness values were found for films with higher proportion of titanium. The coefficient of friction values is influenced by the system used, with higher values obtained for samples with a single coating layer. 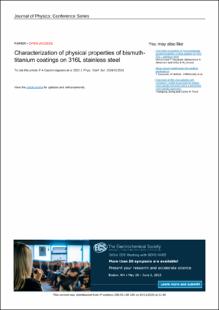