Journal of Physics: Conference Series
Reino Unido
The dense hot MDC-19 type asphalt mixes are considered, by the “Instituto Nacional de Vías” in Colombia, as continuous grading asphalt mixes (asphalt concrete). These constitute most of the surface course, in the structures of in-service pavements, being the object of study and research in different projects to ensure their durability. In the present investigation, unlike other investigations, the mechanical behavior under Marshall monotonic load was studied in the laboratory between MDC-19 dense type asphalt mixtures, comparing plant-produced and laboratory-produced asphalt mixtures. To carry out this process, samples of uncompacted asphalt mixtures were taken, produced in four fixed plants, with which Marshall-type briquettes were compacted. Likewise, samples of mineral aggregates and asphalt cement were obtained from the same plants, which constitute the mixtures raw material produced there. With these materials, briquettes with the same characteristics were mixed and compacted. Subsequently, the resistance under Marshall monotonic load was determined on the briquettes manufactured in plant and laboratory. The optimal asphalt cement content was compared between plant and laboratoryproduced mixtures. An increase in Marshall Stability was found in the briquettes made with plant-produced mixtures, while these required a greater amount of asphalt cement for their production. 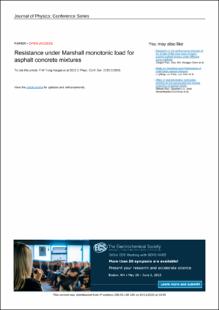