This study presents detailed thermodynamic modeling of a supercritical Brayton cycle operating with carbon dioxide as a working fluid for electric power generation. The study incorporates a main compression intercooling configuration while elucidating the effect of operational parameters on the overall performance based on energy and exergy perspectives. The model was carefully validated with relevant authors. Moreover, two different optimization methodologies, namely particle swarm optimization and fmincom, are evaluated based on convergence criteria. The results demonstrated that the fmincom reduced the iteration time between 140 s - 180 s. The cycle pressure played a central role in the stability of the thermophysical properties of the working fluid. The energy and exergy efficiencies present a direct relation with the inlet temperature. The air cooling and regenerators represent the biggest contributor to exergy destruction, whereas the compressors featured minimal impact on the exergy degeneration. Overall, the proposed configuration demonstrated robust performance to implement with high-grade heat sources, especially in non-interconnected areas. 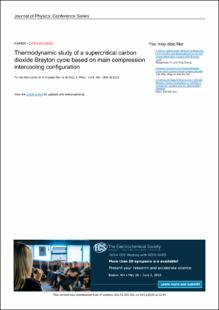 Except where otherwise noted, this item's license is described as Content from this work may be used under the terms of theCreative Commons Attribution 3.0 licence