: Hydrogen is considered one of the main gaseous fuels due to its ability to improve thermal performance in diesel engines. However, its influence on the characteristics of lubricating oil is generally ignored. Thus, in the present investigation, an analysis of the effect on the physical and chemical properties of lubricating oil with mixtures of diesel fuel–hydrogen was carried out, and the environmental impacts of this type of mixture were assessed. The development of the research was carried out using a diesel engine under four torque conditions (80 Nm, 120 Nm, 160 Nm and 200 Nm) and three hydrogen gas flow conditions (0.75 lpm, 1.00 lpm and 1.25 lpm). From the results, it was possible to demonstrate that the presence of hydrogen caused decreases of 3.50%, 6.79% and 4.42% in the emissions of CO, HC, and smoke opacity, respectively. However, hydrogen further decreased the viscosity of the lubricating oil by 26%. Additionally, hydrogen gas produced increases of 17.7%, 29.27%, 21.95% and 27.41% in metallic components, such as Fe, Cu, Al and Cr, respectively. In general, hydrogen favors the contamination and oxidation of lubricating oil, which implies a greater wear of the engine components. Due to the significantly negative impact of hydrogen on the lubrication system, it should be considered due to its influence on the economic and environmental cost during the engine’s life cycle. 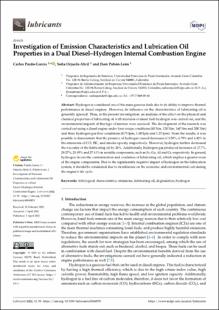