In the present investigation, a study is carried out using numerical simulation on the effects of cylinder deactivation on tribological parameters and emissions in an internal combustion engine. For the development of the research, a tribological model was used to predict the characteristics of the lubrication film, friction conditions, blow-by gas, and deformation of the piston rings. Additionally, the construction of a CFD model was carried out to describe the kinematic movement of the engine piston. The analysis of results allowed for the demonstration of the active cylinders presenting an increase of 21.53% and 7.65% in the pressure and temperature in the cylinder wall. Additionally, the active cylinders present a reduction of 11.33% in the minimum thickness of the lubrication film and an increase in the friction force due to asperities, which implies an increase of 33% in power losses due to friction. The implementation of technologies such as cylinder deactivation causes an increase in combustion gas leaks caused by the increase in pressure of the active cylinders. However, the use of this technology allows reducing 9.09%, 8.26%, and 7.41% in CO, HC, and NO emissions. Although the use of technologies such as cylinder deactivation allows significant fuel savings, it is necessary to consider the negative effects caused by this technology, such as the increase in combustion gas leaks and the increase in power loss by the greatest frictional forces. 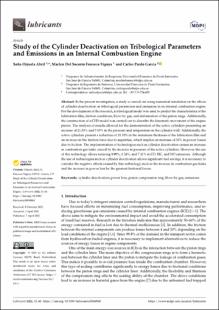