The contact between the piston rings and the cylinder liner is an interface with a strong influence on the tribological behavior and, therefore, directly affects the useful life of the engine components and fuel consumption. Due to this importance, the present investigation carried out an analysis of the effects of dimples and the honing groove in the cylinder liner on the tribological characteristics. A tribological model was developed to study the friction forces, minimum film thickness, and friction coefficient for the present investigation. Similarly, a computational fluid dynamics model was built to determine the dynamic movement of the piston. The validation of the numerical model showed a close similarity with the real behavior of the engine, obtaining an average relative error of 14%. The analysis of the results showed that a 3% increase in dimples’ density leads to a 3.79% increase in the minimum lubricant film and a 2.76% decrease in friction force. Additionally, it was shown that doubling the radius and depth of the dimple produces an increase of 3.86% and 1.91% in the thickness of the lubrication film. The most suitable distribution of the dimples on the surface of the cylinder liner corresponds to a square array. In general, the application of dimples and honing grooves in the cylinder liner are promising alternatives to reduce energy losses and minimize wear of engine components. 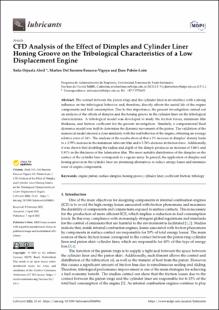