Journal of Physics: Conference Series
. The present research aims to evaluate the physicochemical variables involved in the anaerobic digestion process to produce methane from manure on an agricultural farm; the farm has 2 equines that generate 12 Kg of manure per day. A manure sample was collected, and the following physicochemical parameters were determined: total solids, volatile solids, chemical oxygen demand, and pH. A tubular household biodigester was then implemented, consisting mainly of a polyethylene geomembrane that stores the organic matter and in which anaerobic digestion takes place. The performance of the biodigester was determined by the removal of organic matter quantified by volatile solids and chemical oxygen demand in the biodigester influent and digestate, of which removal of 82% of volatile solids and 74% of chemical oxygen demand was achieved. The average biogas production was 0.5 m3 /day, and its lower heating value was 26,000 kJ/m3 . The pH level of the biodigester was within the range of 6-7, in order to keep the methanogenic bacteria active, in charge of carrying out physicochemical process that guarantees anaerobic digestion and thus, the production of biogas. 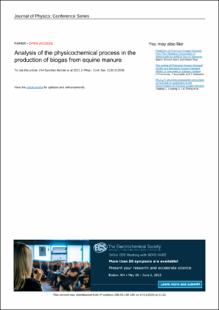