In this study, the rice husk discarded by the agro-industrial rice company in the department of Norte de Santander (Colombia) was used to replace clay material in the manufacture of tile-type ceramics. The materials were used to make test specimens with the presence of 5%, 10%, 15%, and 20% (weight) of scale and with three different types of grain size (1180 µm, 180 µm, and 75 µm mesh through). The specimens were molded using the extrusion technique. The shaped materials were subjected to different firing temperatures (900 °C, 1000 °C, 1100 °C, 1150 °C, and 1200 °C) to establish correlations between the microstructure/topography of the material and some of the technological properties of the ceramic such as the mechanical resistance to bending, resistance to deep abrasion, percentage of water absorption and linear drying/cooking shrinkage. The results show that proportions higher than 10% of rice husk do not obtain ceramics with ideal technological properties for use as pavement or coating. The best results were obtained when the husk was used at 5% and 180 µm mesh through grain size. The X-ray diffraction analysis of the cooked samples shows significant changes in the proportion of phases formed (test tubes with and without substitution of clay material) as the temperature increases. 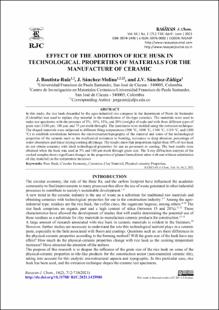