This article analyses the microstructure of ASTM-A36 steel both in its delivery state and after various cutting processes. The material was cut with some methods conventionally used in the metal-mechanical and construction industry, in addition to other non-conventional processes used to a lesser extent in the same industry. Similarly, similar cuts were made to maintain test homogeneity and to analyze the faces of the cut on each specimen in a similar manner. Among the conventional cuts made to the specimens are the milling, oxy-cutting and cutting machine, while the unconventional cuts applied were the wire by EDM and plasma, maintaining as far as possible similar cutting and working parameters. Subsequently, the cut surface of each of the specimens was analyzed and microscopic images of their microstructure were taken, from the results differences were established and it was defined which of the cutting methods used had the greatest effect on the material. 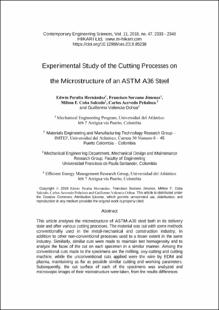