Chemical Engineering Transactions
Italia
A bibliometric analysis of the literature on the subject of Environmental Impact Assessment for a period from 2007 to 2015 was carried out under an expanding and shifting focus. For this purpose, the metadata used was obtained through web of science and analyzed with the Histcite software. The search identified a total of 683 publications related to Environmental Impact Assessment in the period studied, allowing to study the main journals involved in this topic. The country with the highest number of publications was the United States with 88 papers on the subject. On the other hand, the journal with the greatest influence on the subject was Environmental Impact Assessment Review, with 1090 citations, representing the 8.7% of the total citations between 2007 and 2015. Analyzing the evolution of publications per year, there was an increase in research activity on the subject between 2012 and 2014, amounting to 45.6% in those years. According to the type of document from the 683 publications, the 84.6% (578) were articles and 4.4% reviews. These results obtained show an increase in the interest of researchers in the environmental impact assessment topic, which is in line with the climate changes presented on the planet and the global concern to reduce the effects of greenhouse gas, and the better use of natural resources. 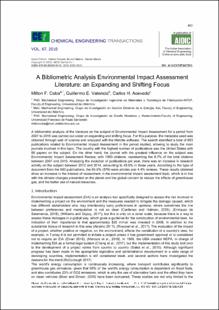