Experimental model of the fine honing

An experimental model of the honing process oriented towards the honing operation for very fine finished is development. A two-level design of experiments has been carried out with three factors and a replica. We chose the factors that have been shown to be most significant in honing machining such as grain size and pressure. In addition, as in honing, the angle of scratching is important and depends on the relationship between the two speeds, linear velocity VL and tangential velocity VT, one of them has also been chosen, the linear velocity VL, and the other velocity VT is kept constant. By varying only VL, the scratch angle is varied and the tangential speed VT is kept constant, the number of factors is reduced and the number of tests is reduced. The variable with the greatest influence and which is present in a significant way in all the output parameters is the abrasive grain size Gst, the pressure parameters P and linear velocity VL did not show to be particularly decisive in the finishing phase, especially for the roughness parameters. Manufacturers of hydraulic cylinders, surface finish of the inner wall of internal combustion engines and all those applications where it is machined with honing 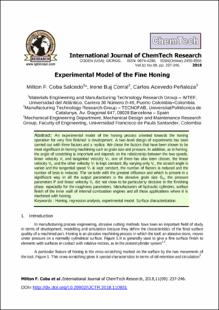