Cuadernos De Administración
Colombia
This paper analyzed the territorial planning of Gramalote in Norte de Santander, Colombia, from the approaches to development planning or territorial development and its relationship with the 2010 disaster. Different approaches to development planning were reviewed from the literature available and in the light of these perspectives; a phenomenological-hermeneutical study with a qualitative approach of descriptive and documental level was carried out, by turning to municipal development plans for the 2004-2007, 2008-2011 and 2012-2015 periods which were the subject of analysis. The results show that Gramalote’s territorial planning has been inadequately carried out before and after the 2010 disaster, since it has been supported by an economic perspective characterized by sectoriality and the inability to respond effectively to the main territorial problems of environmental order. The next development plans are expected to take into account unattended factors from previous years, given the experienced lived by its inhabitants. 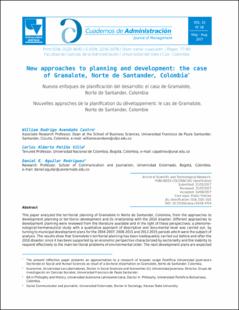