Consumption of energy in the manufacturing of ceramic bricks in the metropolitan area of Cúcuta, Colombia

Journal of Physics: Conference Series
Inglaterra
This research determined the consumption of electrical and thermal energy in the manufacturing of ceramic bricks in the metropolitan area of Cúcuta, city located in Colombia, South America. Three bricks manufacturers were selected using extrusion forming technology, artificial drying and tunnel kiln firing in their production system. An inventory of equipment that consumes electrical energy in industrial facilities was made, quantifying the power consumed and relating it to the monthly work hours. In order to estimate the thermal energy demand generated by the coal supplied in the drying and firing stages, we worked under the regime of stationary operation, measuring the mass of coal dosed in the drying and firing cycle, keeping the pressure variables stable and the temperature. We know that by cogeneration, part of the combustion gases of the furnace, are provided as a flow of hot air to the artificial dryer. The demand for electrical energy in the process was 42000kWh/month; while the thermal energy consumption was 998010kWh/month; and the monthly global energy consumption was 1040010kWh. It was concluded that the distribution of consumption was 96% of thermal energy and only 4% is electrical energy; the stages of firing and drying being those of greater energy expenditure. 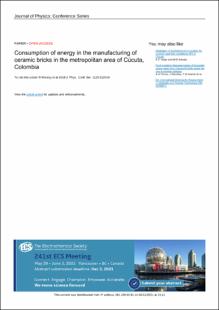