Towards the production of microalgae biofuels: the effect of the culture medium on lipid deposition

Microalgae have been studied in recent years for various reasons, one among them being their potential in the production of biofuels. Biofuels are considered as a renewable source that does not compete with the food industry, and their production results in a reduced environmental footprint. The objective of the present study was to evaluate the different culture conditions that influence the productivity of the microalgae Chlorella vulgaris and Scenedesmus obliquus as a potential source for the production of biodiesel. Bold, Bristol, and modified Algal Assay Procedure (AAP) culture media were evaluated to determine which of them can provide the best conditions that favor biomass production and lipid deposition. The results indicated that S. obliquus cultivated in Bold medium exhibited a higher production of biomass after 30 days (1.730 g/l), while C. vulgaris showed a higher production in the modified AAP medium (1.880 g/l). Although the cultures grown in the AAP medium showed a more significant percentage of biomass comprising lipids than those in the other two media, between the two microalgae, the highest final lipid production was obtained by growing S. obliquus in Bold medium (0.685 g/l, 39.60% of biomass). N, P, Fe, and Mo were the elements added to the growth media, and depending on their concentration in the media, there were differences in the production of lipids. Thus, it can be concluded that S. obliquus cultivated in Bold medium has the highest potential in the production of lipids for biodiesel, but it is necessary to further optimize the cultivation of biomass to obtain a greater quantity of lipids, while interfering as little as possible in its synthesis capacity. 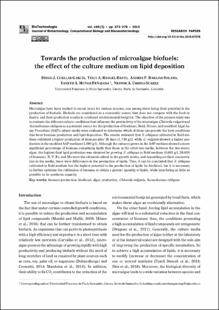